One of the most valuable assets retirees have are their Social Security benefits. Depending on an individual’s longevity and income over their career, Social Security payments could ultimately total upwards of $1,000,000. Unfortunately, based on my experience, many people haven’t given much thought as to how they can maximize this benefit. And because of how Social Security is coordinated for a married couple, poor planning can potentially result in several hundred thousand dollars of lost benefits over a lifetime.

Let’s look at a typical scenario. Meet John Doe. John is 62 and a bookkeeper for a construction company. He earns $60,000 a year. His wife Jane, also 62, is in middle management for a manufacturing firm earning $100,000 per year. They have worked their entire careers with steadily increasing pay over time. They have saved for retirement, but neither has a pension and they know that Social Security will be an important part of their retirement plan.

Because of the high cost of health insurance, both plan on working to at least age 65 when they can begin Medicare. However, neither of them thinks they will want to continue working full-time much past that. They have too many things they want to do, travel and spending more time with the grandchildren being at the top of the list.

Both are in reasonable health. John takes a daily statin for his cholesterol and could stand to lose a few pounds. Jane was diagnosed with high blood pressure soon after the kids were born and has been on medication ever since. Although she jokes that John and the kids caused it, she suspects it’s really hereditary and is worried about her own longevity. Her mother suffered a crippling stroke in her mid 70’s and passed away a few months later. 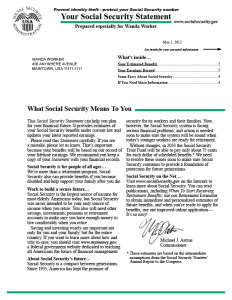 But who wants to wait that long? They would have to either work much longer than planned or live on savings. If they wait, who knows if they’ll live long enough for the increased benefits to make up for the money they took from savings instead? And based on Jane’s longevity concerns, should they consider starting at different ages?

So, does it really matter that much? Let’s put it this way, if they choose wisely and as a couple have statistically average longevity, they could end up with $350,000 or more in lifetime benefits than if they make a poor decision. We’ll come back to what they should do later.

How Can Two Decisions Be so Complicated?

The only choice that needs to be made around Social Security is when to begin taking benefits. On it’s face it sounds simple enough. And for a married couple, they can each decide independently when to start. However, because of how Social Security is set-up, the total lifetime benefits to the couple are very much dependent on how these 2 decisions are coordinated.

When it comes to Social Security, there are many different scenarios and strategies that could be discussed. To keep things manageable (i.e. a blog post that doesn’t take 4,000 words), I’m going to spend this post discussing the situation I outlined above. However, I’ll also cover some basic principles that apply to divorced and widowed individuals as well as those who have never been married.

Social Security is essentially a government sponsored pension plan. And like most corporate pension plans, in the early years it was pretty simple to understand. When an eligible person reached 65 years of age, the government would start mailing them a monthly check. The amount was based on the number of years worked and the level of income. And when they died, the checks would stop. Over the years, however, the plan was amended to provide benefits to non-working spouses and more flexibility in choosing the age at which benefits could be claimed. And while on the surface Social Security still seems pretty simple, when you start looking at the details it can get complex quickly. And with the way the rules are written for married couples, this can be especially true.

These rules apply for everyone, singles and married couples alike. For an individual who was never married, the question on when to begin taking benefits is based on how long they think they will live. Generally, if they think they will live to their early 80’s or longer, they should wait to age 70, or as long as possible, before starting benefits. This is because once they reach their early 80’s, the cumulative value of the increased benefit they get by waiting catches up with the reduced benefit they could have began taking earlier. This is also known as the break even age.

However, it gets more complicated for married couples. When each married spouse begins Social Security, it could impact their partner’s benefit and on the total lifetime benefits received. That’s because there are a couple additional benefits married couples receive which are not available to individuals, unless they were previously married or widowed. In those cases, they may benefit as well.

The Benefits of Marriage

The first additional benefit is that Social Security gives each spouse their own benefit or half of their partner’s benefit, whichever is higher. There are a some caveats to this. One is that to qualify for half of their spouse’s benefit, that spouse has to already be claiming benefits. And, just like with their individual benefit, the spousal benefit is subject to the same percentage reduction if they claim it early, before their own FRA.

Because of these additional rules applicable to married couples, proper timing for when each spouse begins taking benefits could result in potentially tens or hundreds of thousands of dollars more in total benefits over the course of their lifetimes.

Overall, married spouses in their sixties have an even shot that one will probably live past their 90th birthday (see chart). And if they are middle class or better, the odds improve further (Source: Harvard). On the flipside, the odds that both you and your spouse make it to 90 are much lower, less than 20%.

And for those of you whose parents and/or grandparents died relatively young and don’t think these statistics apply to you, here is some good news. Genetics plays less of a role in life expectancy than previously thought (Source: Nature). The longevity of your parents plays only a minor role in how long you’ll probably live .

So, because of this and the fact that the higher Social Security benefit will last as long as one spouse is alive, the higher earning spouse should maximize their benefit. Most likely this means waiting until age 70 to begin taking benefits. And, since it’s unlikely both spouses will live past 90, the lower earner should begin taking their own benefit as soon as they are eligible. However, depending on their age and income, they may need to wait until they have stopped working full-time. In other words, they should pass the Social Security “Earnings Test”.

A Cheat Sheet for the Earnings Test

As I mentioned earlier, reduced Social Security benefits are available as early as age 62. However, until full retirement age is reached, there is an earned income allowance that, if exceeded, will reduce them even further. In 2018, this allowance was $17,040 (it goes up a little each year with inflation). When more than the allowed income is earned, Social Security benefits are withheld by $1 for every $2 above the allowance.

For example, if Social Security is claimed at age 62 while annual earnings are $30,000, then $6,480 in Social Security benefits are withheld. Once the FRA is reached, benefits are not withheld regardless of income. For most people who are working full-time, it will not make sense to begin taking benefits until they retire.

The Optimal Strategy for John and Jane

Based on John and Jane’s story and the information above we can make the following recommendations for them:

The poorest decision they could make is both taking benefits beginning at age 62. If they did and lived a statistically average life, one of them dying in their early to mid 80’s and the other living to their early 90’s, the total amount of benefits received would have been over $350,000 less than if they used the optimal claiming strategy.

The Optimal Strategy for You

If you’ve read this far, you’ve been either thinking about your Social Security strategy or you’ve got insomnia. If it’s the former, then I would highly recommend talking with your financial advisor about your specific situation. They should be able to help you devise an optimal strategy and coordinate it with the rest of your retirement plan and investments. If your advisor doesn’t do this type of planning or you don’t have one, find a CFP® near you. Many will assist with this planning for a flat fee or at an hourly rate.