A strong final quarter pushed large company stocks to a 31% return for 2019, making it the best year since 2013. This year’s performance also capped off a strong decade, one where the S&P 500 averaged a return of 13.5% per year including dividends. This was so much better than 2000 – 2009. Stock performance that decade, which included 2 recessions, was -0.9% per year, dividends included! (Source: LPL)

Over the year, small cap stocks performed well but couldn’t keep up with the largest companies. Looking deeper, growth outperformed value and healthcare, financial and technology companies led the way.

Does a blowout year mean that 2020 is likely to be more of the same? Or will it take a breather and pull back? There’s no way of knowing of course. Looking back at previous years where stocks went up by 30% or more, it would seem there’s a pretty good chance of another positive year. But don’t expect another 30%. The last time that happened was 1954 – 1955. 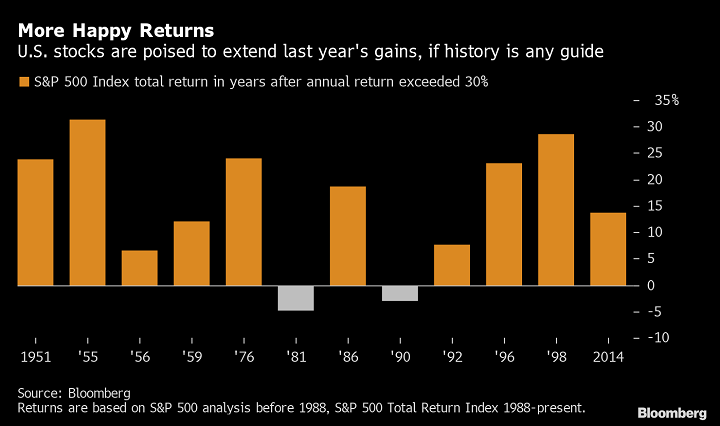 Both developed and emerging countries outside of the U.S. had great years as well. They just weren’t able to keep up with domestic stocks. This was also the case for the entire decade. Since the great recession ended in 2009, international stocks are up 124%. Not bad, until you compare that with the U.S. which is up 378% during that time. (Source: JPMorgan).

U.S. and international stocks have historically traded market leadership. From 2003 – 2008, international stocks more than doubled U.S. stock performance. Is it time for the U.S. to pass the baton back? A number of investment firms have been predicting this for the past several years and been wrong. Many made the same prediction this year. We’ll see if they’re right this time.

Not to be outdone by their flashier stock brethren, investment grade U.S. bonds had their best year since 2002. All of that gain came in the first 3 quarters, however, as performance was flat the last 3 months.

Bonds strong performance can be primarily attributed to the Fed. After raising interest rates 4 times in 2018, the Fed realized it may have gone too far and reversed course this year. The resulting 3 interest rate cuts gave investors confidence that Jerome Powell had their back and acted as a tailwind for bonds and stocks.

Until the late push from stocks, investment real estate was the performance leader for 2019. It still finished a strong 2nd, up almost 30% for the year.

With global interest rates stuck at or near all time lows, income seeking investors have had to move some assets into alternatives such as utility stocks and real estate investment trusts (REITs). While subject to some of the same risks that affect other stocks (recessions, rising interest rates), these areas are typically less volatile than the overall market. And for now they pay a much higher dividend than investment grade bonds.

At the end of 2018, markets were in a pretty dour mood, worried that the next recession was just around the corner. Sentiment changed quickly in January however, and that optimism carried every major asset class higher throughout the year.

We don’t see too many years like 2019, where both stocks and bonds have outstanding performance. To give you a sense of the rarity, investors with balanced portfolios (60% stocks/40% bonds) would have to go back to 1997 to find a better year.

The 2010’s turned out to be a great decade for investors. It was much needed after the previous one.

What will 2020 bring? If history is any guide, it should wind up being a solid year punctuated by a few anxious moments, such as the one we’re going through now with the Coronavirus. We shall see.